A Gold Cup in Canada? We can but dream 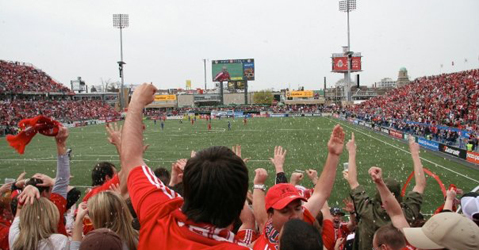 The 2013 Gold Cup showed why the US is the obvious choice to keep hosting the confederation championship, with ticket sales relying on Central American and Caribbean communities across the US. The tournament is held every 2 years, though, with every other version a ‘B’ Gold Cup, so why not spread one around? BMO Field in Toronto is one of the many CONCACAF venues that could host a Gold Cup group.

It just makes sense to keep playing the tournament at American stadia – there’s guaranteed interest for almost every game, from Belize and Haiti to the usual sellout for a US-Mexico final. There might be something to be said for diluting the product, though, and CONCACAF could use of the ‘B’ Gold Cups to spread some group games around. With that in mind, I’ve come up with some proposed setups for rotating it around. It’s unlikely these scenarios would be considered even by 2017, but each one is ready to go:

Canada
There have been rumours in the past that Canada would host some Gold Cup group games, and that seems the most likely option for a CONCACAF brass who are wary of changing a successful formula. The CSA could host the entire tournament, though. They staged the 2007 FIFA U-20 World Cup and are set for the Women’s World Cup in 2015.

Mexico
Mexico has form with major tournaments, having hosted the World Cup in 1970 and again in 1986. Estadio Azteca in Mexico City has held Gold Cup games before, including the final in 1993 and 2003, but the country has the stadia to host more:

Panama/Costa Rica
I know it’s pure fantasy at this point, but Panama could be rewarded for their Gold Cup record with co-hosting duties alongside Costa Rica in the future. They share a border and each has a refurbished or new national stadium, but there’s no reason you couldn’t add other host cities throughout Central America.

West Indies
The Caribbean worked together to host a Cricket World Cup in 2007, and a regional co-hosting bid is their best bet in this hypothetical scenario. Here are some possible host cities: