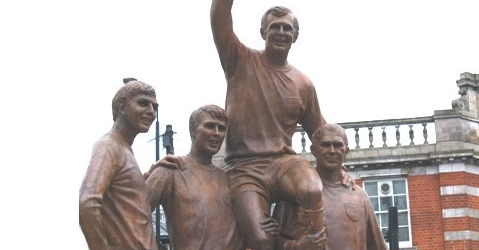 West Ham United – second place in the American top division. That’s what happened in 1969, when the flagging NASL imported foreign sides to take up the summer season. West Ham took up the name and colours of Baltimore, with World Cup champions Bobby Moore, Geoff Hurst and Martin Peters all turning out for the Bays…

The Baltimore Bays had taken up play in 1967, helping to found the NPSL (not that one) along with our very own Toronto Falcons out of Varsity Stadium. Their 14-9-9 record saw them win the East Division with 162 points (naturally). In the championship series against the top West team, Oakland, the Bays stole a 1-0 at home win before dropping the series 4-2 on aggregate.

The following year the league merged with the United Soccer Association (USA! USA!) to form the NASL, the league that went on to feature Pelé and Beckenbauer. The early years weren’t so glamorous, though, and with the 1969 season not yet ready to go ahead, executives that came in from the USA wanted to try an angle that had worked in that league – guest teams. 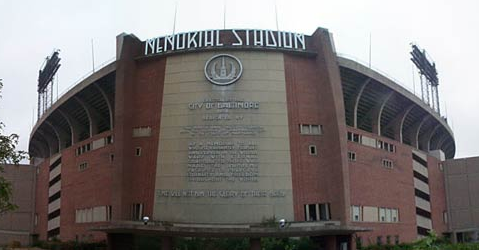 In the USA’s first season back in 1967, Hibernian had played out of Toronto with Sunderland being hosted by Vancouver. Two years later and with just five cities left in the fledgling NASL, the league did similar and the first half of the 1969 season was held as an “International Cup”. West Ham, playing as Baltimore, took second place, unable to overcome the unbeaten Kansas City Spurs, represented by English side Wolves. Dundee United, as Dallas, took their hosts’ tangerine colours back to Scotland to launch their now-trademark kit.

Baltimore coach Gordon Jago had helped recruit West Ham through friend and Hammers boss Bob Greenwood (who went on to manage England in 1977). As a result, world champions Bobby Moore, Geoff Hurst and Martin Peters all turned out for the Bays that year, fresh from a 4-1 thumping of Scotland in the Home International Championship, while a young Trevor Brooking scored 6 goals in 8 games. The attendances weren’t quite what league brass had hoped for, though – Baltimore’s hosting of the Spurs (actually Wolves) drew just 5128 in the season opener.

For the tournament, FIFA allowed the USSFA a typically American experiment where no player was called offside during a free kick. While such a rule change might benefit the current West Ham setup under Sam Allardyce, Greenwood didn’t see the advantage. Eventually the change was scrapped.

The summer campaign, which helped the league to stall and prepare rosters for the second half of the season, was one step beyond the traditional preseason tour: a half season played entirely by British clubs. What other American city can say they’ve had a future England manager in the dugout, along with 3 reigning world champions on the field?

Before leaving Baltimore, the Hammers played off against the “real” Bays, who had completed their roster ahead of the closing season. This wasn’t the first time a city team had hosted a top English side – Liverpool had visited the Baltimore Americans as early as 1946, while Chelsea took on the Rockets in 1954. More recently, Chelsea returned in 2009 to set the attendance record for soccer in Baltimore with 71 200 against Milan at M&T Bank Stadium.

Without their West Ham contingent in the second half of the 1969 season, the Bays’ fortunes plummeted, averaging just 1600 fans at a high school field and finishing rock bottom of the closing season. They folded the following year, while the rest of the NASL clung on for dear life until Pelé joined in 1975 and started a new chapter of American soccer.