When Arsenal played in Toronto

Arsenal don’t do North American tours. Not recently, anyway. Their rivals at the top in England have all been in the US lately, but Arsène Wenger prefers to take the club to the Austrian alps – or, at a push, southeast Asia and Japan. There hasn’t been any indication that Arsenal will spread their brand on this side of the Atlantic any time soon, but this hasn’t always been the case.

That said, visits to the region have been fleeting. Arsenal played in a CONCACAF country for the first time in 1966, winning games in Trinidad, Jamaica and Curaçao. In 1986, there was an indoor friendly on Long Island. The last time Arsenal were in North America was in 1989, when the newly-crowned Premier League champions beat Independiente 2-1 in Miami on a pair of David Rocastle goals. Barely 10 000 people came out to see the side who had just won the title at Anfield in that famous Fever Pitch moment.

13 years before their New York trip, Arsenal played in Canada. In 1973, Bertie Mee took Arsenal across the pond after finishing second the previous season. Liverpool had stormed to the title after a lean period while Arsenal’s double-winning team of two years earlier was on its way out. On May 23 Arsenal took on “Canada Selects”, apparently an NSL All-Star team, at Exhibition Stadium in Toronto. BMO Field currently sits on the site of the old Canadian football stadium (it was later modified to accommodate the Blue Jays). Here’s the program via Special Auction Services (the 3rd one down). The Gunners won 1-0 on a second half Charlie George goal. I was able to dig up the starting lineup courtesy of Andy Kelly’s brilliant Arsenal Resource Website:

The club stayed in town and played Bermudan side Devonshire Colts on the 27th with the same lineup, scoring twice in each half for a 4-0 win. Radford bagged 2 goals while George and Marinello had 1 each. The club then went on their summer break and weren’t back in action until a preseason tour of Norway in August. 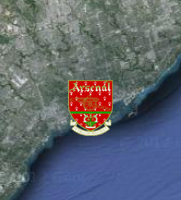 Toronto has played host to friendlies between big European sides in the more recent past, but Wenger and Arsenal haven’t seemed interested in a North American tour since the old days. They’re back in Asia this summer and look to be getting comfortable there after spending most preseasons at low-key training camps in Europe. The Gunners have a massive presence in Africa, and while tours there are uncommon, Manchester United played in Nigeria a few years ago. It doesn’t seem to matter though as Wenger hasn’t been interested in touring there either. For Canadian Arsenal fans, 1973 could be the last time that Arsenal were seen in this country for a long time.

Were you at the CNE for that game in 1973? Have any information about Arsenal’s visit to Toronto? Comment below.