Can Montreal do the double? 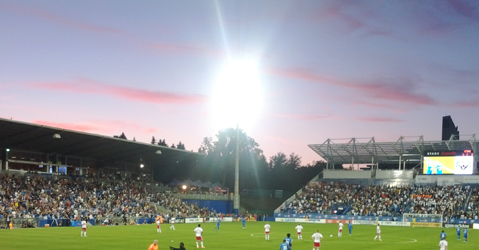 Montreal were back in form this weekend and now top the MLS Eastern Conference. Although they still have to balance the league run-in with CONCACAF Champions League play, last night’s 5-0 win over Houston showed that Marco Schällibaum’s men could be on course for a Voyageurs and MLS Cup double.

Marco Di Vaio found the net twice against Houston and sits atop the MLS scoring charts. This won’t be a surprise to those familiar with the Italian hitman – he had 10 goals in 30 Serie A games for Bologna two seasons ago and has shown no signs of slowing down since moving across the Atlantic.

Di Vaio is surrounded by quality midfielders in Felipe Martins and Justin Mapp. As strange as it would have sounded a year ago, Mapp should be in Jürgen Klinsmann’s mind for a US national team call-up – the 28-year-old finally looks worthy of adding to his 8 caps between 2005 and 2007.

Mapp was named the top player in this year’s Canadian Championship, the domestic cup that’s currently open to the country’s four professional teams. If l’Impact do add the Supporters’ Shield or even the MLS Cup to their Voyageurs Cup win, MLS Commish Don Garber might have to look at the unbalanced rule that allows them both Canadian and US players as domestic.

Montreal did win a lesser double with the second division A-League and Voyageurs Cup back in 2004, but no Canadian club has yet won the MLS Cup. If Montreal were to claim it alongside the Supporters’ Shield, it would cap off a “domestic” treble, something that hasn’t been done by any American MLS sides (replacing the Canadian Championship with the US Open Cup).

D.C. United won the league and cup double in 1996, something that was matched by Chicago in 1998 and LA Galaxy in 2005. Going back a few decades, New York-based Brookhattan won a domestic treble in 1945 consisting of the American Soccer League, Open Cup, and Lewis Cup (a league cup for the ASL).

Winning the MLS Cup, Voyageurs/US Open Cup and the Champions League would constitute the treble, such as that won by Manchester United in 1999. A World Club Cup Championship in December would cap off a quadruple in the calendar year, meaning that Montreal’s next shot at the treble or quadruple would be to win everything in 2014.

Call it what you will – the majors, the triple crown, the trifecta – but talking of continental victories is likely a little premature for MLS. That said, Montreal’s continued performances this season have shown that they’re equipped to try and avenge 2009’s Champions League nightmare.

At the very least, they look set to be the first Voyageurs Cup winner to make the MLS playoffs.

Has any other CONCACAF club team won their own league and cup trouble, or even the treble? Leave a comment below.

2 responses to “Can Montreal do the double?”